So where is all the lost money going?

Have you ever tried to buy something from an organization, and their service became so poor that you left? For example, you waited so long on a queue, became frustrated and left. Or your organization loses a contract because your representatives seemed uncaring. These are typical examples of direct loss of sale due to poor service.

Lost sales are the first way poor service is shrinking the bottom line. People will just leave and go elsewhere.

This is true for online businesses just as much as offline businesses. On average, roughly 80% of people will not complete a transaction due to poor customer service. That’s four out of five.

The word-of-mouth behavior of dissatisfied customers is often underestimated. Study shows that customers who are dissatisfied tell twice as many people about their dissatisfaction as those who are satisfied. Hence bad news travels faster than good.

Poor service means bad word-of-mouth, which means you potentially lose customers who may have purchased from your organization had their friend not ruined the reputation of your organization.

58% of customers will never use a company again after a bad experience. And many customers who are dissatisfied don’t complain. Research shows that 90% of dissatisfied customers do not complain and most show their dissatisfaction by not buying again.

Unfortunately, the 10% who do organizations a favour by complaining are sometimes ignored with their complaints not well handled. When you ignore your customers’ complaints, you’re losing the opportunity to quickly solve the problem that will potentially retain the 90% who do not complain.

In other words, you need to listen to the people who are talking to you and ensure you fix the problem for them as well as anyone else who may have experienced it, but didn’t say anything. If not, people will complain about you to everyone but you, and be taking their business elsewhere.

Please note this: Always assume other people have the same problem as the customers who reach out to you. 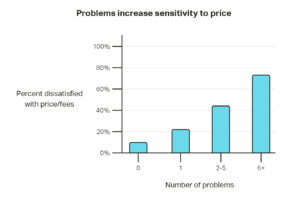 Hence with poor service, it’s going to be difficult (if not impossible) to charge a premium or change your pricing structure because poorly treated customers are more sensitive to price changes than well treated ones.

These four outcomes highlighted above are like ‘drainpipes’ inadvertently switched on by poor service with people and systems playing critical roles.

In a nutshell, providing great customer service and avoiding poor service are the most impactful things your organization can do to grow. They offer a unique opportunity for you to build your organization around the element that matters most – loyal customers.

LearnSmart is an e-learning service of Paradigm Learning Services. Our primary focus is to bring learning to people. Hence, we are providing the most convenient way to learn in the areas of Business, Soft Skills, and Office Productivity Tools. We believe the value of modern learning lies in both the outcome and the process. Hence it should be efficient, convenient, self-paced, affordable, and result-oriented. We built LearnSmart to deliver on these values